Dominance is the establishment of a rank in a group of people or animals. When two or more chinchillas live in the same cage or colony, dominance comes into play. Whether the group is all males, all females, siblings, old or young, a mixed group, or are in breeding, they will establish who is the most dominant. Occasionally, dominance is reestablished when animals have been separated, a new animal is introduced, a young chinchilla reaches puberty, or other changes, such as location, have occurred.

To do this, chinchillas use several different approaches. Chinchillas will bark, chase, size each other up, hump, pull hair, spray urine, bite, and fight to determine their pecking order. These attempts can vary from mild barking to serious fighting, even to the death. The humping will occur between males and females, males and males, and females and females. 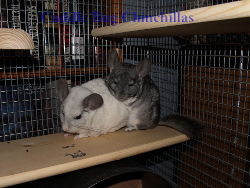 To lessen the severity of the conflict between two chinchillas and avoid injury or death, proper introductions must be done. Do not, by any means, just place a new chinchilla in another’s cage. It is normal for chinchillas to bark, size each other up, chase, pull hair, spray urine, and hump each other. These behaviors will subside after the chinchillas determine which one is the top dog. This is true as long as the individuals involved are not both very dominant animals. In the case of two strongly dominant animals, the barking, chasing and hair pulling become more aggressive and the animals will furiously chase, bite and fight each other, possibly to the death.

For the safety of the animals involved, all introductions should be supervised with the observer watching for signs of aggression and a second cage should be kept handy. The signs to watch for include, but are not limited to, excessive hair pulling and chasing, biting, and fighting. If things get to this point, the chinchillas should be separated immediately. Don’t wait for bloodshed as this can lead to serious injury or death. If blood is drawn, the chinchillas should be separated permanently.

Another form of asserting dominance is bullying. When one chinchilla bullies another, the dominant one will try to keep the other chinchilla from eating, drinking and using items such as the wheel or the chinchilla’s house. Bullying is less severe than actual fighting; however, it is just as serious. A bullied chinchilla will often sit in a corner of the cage away from the bully. They will lose weight and can seem terrorized. A solution to this problem is to supply two of everything, food dishes, water bottles, houses, etc. If the bullied animal is still showing signs of stress, i.e. cowering in a corner, shaking, not eating or drinking, or continuing to lose weight, the chinchillas will need to be separated.

Throughout a chinchilla’s life, dominance is important if they are sharing a cage or play area. Two chinchillas that have already determined the pecking order can, at any time, reestablish who is the most dominant. If two chinchillas do get along with each other, there is no guarantee that the situation will remain that way. Cage mates have been known to suddenly turn on each other for no apparent reason; even if they have been together since birth. Any time two chinchillas are showing signs of a struggle for dominance, they should be watched carefully and separated if the struggle becomes too severe.