What is Fur Chewing?
Fur chewing is a habit exhibited by some chinchillas. When a chinchilla fur chews, it literally chews its own fur. This chewing is not the same as nibbling at an itch or grooming. Neither of these damages the chinchilla's coat. Fur chewing causes parts of the coat to be shorter than the rest. These shortened areas are all in areas the chinchilla can reach with its mouth. A fur chewed coat will look rough and choppy with long and short areas. The chewing can be in one small area, usually on one or both hips, or it can cover most of the chinchilla. In extreme cases, the chinchilla can chew the fur down to the skin leaving a lion-like mane around the neck and head. 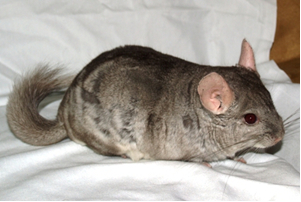 This is a mild case of fur chewing.
Note the rough looking areas on her hip and side.
Causes
Fur chewing is usually the result of stress. Changes in the chinchilla's environment or routine can spark an out break of chewing. Not all chinchillas chew their fur when stressed. If is believed that there may be a genetic aspect that predisposes the chinchilla to chewing when stressed. For this reason, any chinchilla that chews its fur should not be bred. This is to avoid passing on the trait to the chinchilla's offspring.

Treatment
Medical treatment for fur chewing does not exist. The best an owner can do is to try to figure out what is stressing the chinchilla and remove that stressor. In most cases, the stressor is never known. Whether or not the stressor is discovered, there are some things an owner can do to help the chinchilla. The biggest of these is to offer plenty of chew toys of many different types. Hopefully, the chinchilla will begin chewing the toys and stop chewing its fur. Other things that can be done are to move the cage to a quieter location and make sure 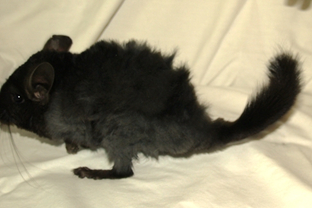 This is a severe case of fur chewing.
This chinchilla has chewed on every
part of his body that he could reach.
that the chinchilla is kept at an appropriate temperature and is cared for properly. A regular routine should be established for feeding, playtime, and any other activities involving the chinchilla. These measures can lessen the stress. The result can be less chewing and it sometimes works to stop it altogether. Often, the chinchilla will continue to fur chew in spite of any efforts made to stop it. Additionally, a chinchilla that fur chews and then stops should still be considered a fur chewer. The reason for this is simple, the chinchilla stopped because the stress was removed. If that stress reappears or a new one comes to the fore, the chinchilla will begin fur chewing again.

Many chinchillas will stop for a while and then restart. This can happen over and over again. Some fur chewers will also chew their cage mate's fur. If the chinchilla has chewed areas that the chewed animal could not have reached, such as on the top of the head, another chinchilla did the chewing. Both self chewing and chewing others can be done by the same animal. If a chinchilla is chewing on its cage mate, it might be best to separate them, unless the chewed areas do not bother the owner. There is no known cure for fur chewing.