Chinchillas as a buisiness

Costs
The first thing to consider before beginning breeding is the cost of setting up. This includes the type of caging, accessories such as feeders, feed, hay, bedding materials and dusting and watering equipment. To start, the type of breeding method needs to be determined in order to purchase the proper caging. Chinchillas can be bred in pairs, trios, colonies and runs. Pair breeding requires one cage per pair plus additional cages for separating the males while the females are pregnant or nursing young. More cages are needed to wean the kits once they are old enough and for growing out animals for show or breeding. While kits can be weaned together, the males and females need to be separated from each other. 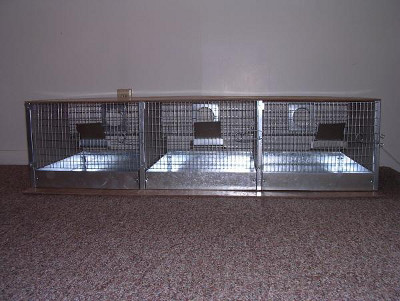 A 3 hole breeding run
Trio breeding places 3 chinchillas (two females and one male) in one cage and colonies consist of several females with one male. Breeding in runs involves 3 or more cages that are arranged side by side and are connected in the back with a tunnel that opens to each cage. This is known as a run. The females are placed in the cages and the male is allowed to travel via the run to visit any of the females. As with the pairs, each of these methods requires additional cages for the males, and weaning kits. If showing is in the plan, more cages will be needed for growing out the kits. Spare cages are also necessary for injured or sick animals or chinchillas that have been fighting. A good rule of thumb is to have one cage for every chinchilla, regardless of the methods you use. One thing to remember is that any cage used for breeding should have good ventilation and be kit safe. This increases the cost of each cage.

In addition to the cost of the cages, items such as feed, feeders, hay, bedding, dusters and dust bath, and watering equipment need to be purchased. Even with just a few animals, these items, plus the cages, can run into the thousands and that does not include the purchase of the animals or vet bills. A breeder should always buy quality pedigreed animals. Chinchillas bought from pet stores or rescues should not be used since there is no way of knowing whether or not they have any genetic issues. Besides, it often costs the same or is cheaper to buy a breeding quality animal from a reputable breeder. On average, a breeding quality chinchilla can run from $100 to $500 depending on its color, quality and show record. If starting with just one pair of quality chinchillas and the required supplies, it can cost $1000 and up.

Herd Maintenance
The costs to maintain a herd of chinchillas includes the feed, hay, dust and bedding. Also included in this list are veterinarian fees, repairs and replacement of equipment, replacing old or deceased animals, and the breeder's time and energy, not to mention the emotional toll it can take on a person.

Feed, hay, dust and bedding all need to be purchased regularly, regardless of whether or not animal sales have brought in enough money to pay for it. It is not a wise idea to go with whatever is cheapest. Cheap feed may not be nutritionally balanced for chinchillas and can cause health issues, poor coats and problems with breeding. Cheap dust is detrimental to the coat and cheap equipment can be dangerous to the chinchillas. If the animals are not in good health and coat condition, they will not sell or will sell for much less. This is not to say that costs cannot be cut, it just needs to be done wisely and not at the expense of the chinchillas' well being. 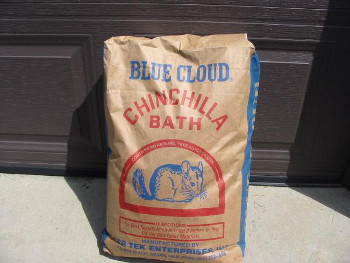 A 50 pound bacg of bathing dust.
Even a small herd can go through serveral
of these a year
Even though chinchillas are considered domesticated animals, when it comes to vet visits, this is not the case. Veterinarians consider chinchillas to be exotic animals and treatment for a chinchilla can be very pricey. It is rare to pay under $100 for a vet visit and it is more likely to be a few hundred to thousands of dollars. With multiple animals, the vet fees for each year just increase.

Other expenses include the repair or replacement of the equipment and the breeder's time and energy. Even with the best of care, equipment can wear out or become broken. Taking care of the equipment, feeding, and caring the chinchillas all take time and energy. Even a small herd can take an hour or two per day to properly care for them. Also, illness, injury, old age and the need to improve the herd requires a breeder to replace animals with new, fresh stock. In addition to the physical aspect of caring for chinchillas, there is the emotional part. Losses occur in even with the best of care. Incidents of animals getting sick and injuring themselves or each other happen all the time. This can be very trying emotionally. A breeder needs to be able to handle the heartbreak of loosing chinchillas.

Showing
Showing chinchillas is the only way to know that your breeding program is producing quality chinchillas. A breeder needs to grow out some of their animals to show age (8 to 18 months) and participate in shows. It is difficult to know at 8, 10 or 12 weeks whether an animal has good quality. Shows give the breeder an opportunity to compare their animals to those of other breeders. Attending shows can be quite costly due to entry fees, travel expenses and hotel bills. Even so, participating in shows is worth the expense.

Once all of these expenses are added up, setting up and maintaining a chinchilla herd of any size can be quite expensive and often costs more than what is brought in by the sale of the kits.