What is a rescue?
A rescue is a business that takes in unwanted, homeless, neglected or abused animals. A good rescue will supply these animals with food, shelter, clean water, care from a qualified veterinarian when needed, and lots of love and attention.

Why are rescues necessary?
The need for rescues exists for a number of reasons. The first reason is the changing dynamics of the family that owns the chinchilla. The family may need to move, have discovered that one or more people in the family are allergic to the animal or its supplies, can no longer care for it due to time or financial hardships, or just have lost interest. Sometimes, the owner finds that they cannot deal with a behavior that the animal is exhibiting or that it is more of a commitment than they originally thought it would be. Since chinchillas can live to be 20 + years of age many of them end up bouncing around from home to home for one or more of these reasons. It is fairly easy to find homes for babies, but not for an adult chinchilla. Most of them end up in a rescue at one point or another. 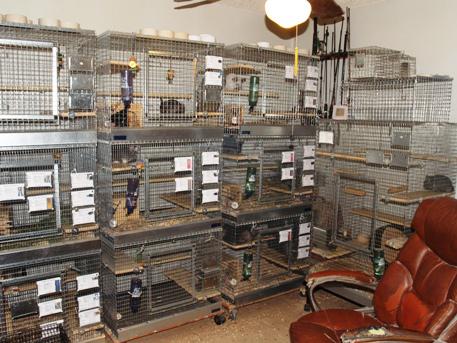 A clean and well managed chinchilla room.
Why should I use a rescue?
Using a rescue to re-home a chinchilla can alleviate some of the stress involved in finding a new home for a pet. It is much easier on both the owner and the chinchilla. A rescue has the time and resources to find a good, qualified home for the chinchilla. Most rescues screen any potential adopters to weed out the people who neglect, abuse, or otherwise would not make a good home. If an owner chooses to use one or more of the many free online ad services, there is no way for them to be sure that the people responding to the ad will be responsible chinchilla owners. A chinchilla in this situation is very likely to end up in the hands of an irresponsible, neglectful or abusive person who seemed like such a good person in emails and phone calls.
How can I tell if a rescue is good or bad?
A good rescue has a limit to the number of animals they can take in. Often, poor rescues or hoarders will take in every animal they can get without regard to the issue of overcrowding and the related health and behavioral issues overcrowding can cause. In good rescues, males and females are kept separate and not allowed to breed or even come into contact with each other. Pregnant females or those that have been in with a male in the last four months are kept at the rescue until they either deliver and nurse their litters or have been determined to not be pregnant. A good rescue will never adopt out a female that is pregnant or nursing. A poor rescue sees no problem with putting rescued males and females together and allowing them to breed or adopting out a pregnant chinchilla.

Good rscues also keep their cages and the rest of the environment clean. When entering a good rescue, there should be no smell from the cages except for the smell of pine or aspen shavings (if they are using shavings) and hay. Regardless of the type of bedding used, if the smell of urine is present, the chinchilla cages are not being kept clean. Another thing to look for is if chinchillas have fluffy, beautiful coats. If they look greasy or matted, the chinchillas are not being dusted often enough and the cages are probably dirty. A good rescue will make sure that all equipment is kept clean. Dirty dishes and water bottles are a sign of neglect. Also, look to see if the chinchillas have clean food, hay and water in their cages. If not, the rescue is not doing their job.

In a properly run rescue, the caregiver will know the personalities of all of their animals and will be able to match a chinchilla's personality to that of the prospective adopter. When a rescue gets overcrowded this becomes too difficult and animals will just be sent out with just anybody who can pay the adoption fees. 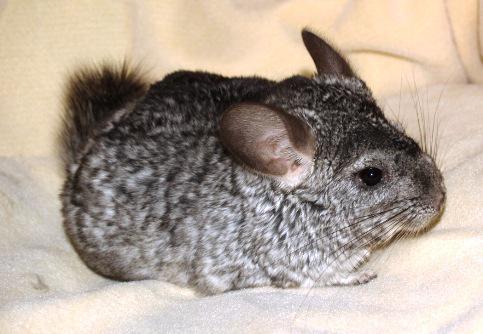 A greasy, neglected chinchilla.
Lastly, a well run rescue provides medical care for all of their animals. With chinchillas, this may mean that the rescue has all animals checked by a veterinarian or they only take them in if there are any concerns about the chinchillas' health. Either way is fine with chinchillas as long as medical care is available when needed. It is not necessary to have every single rescue visit the veterinarian, but it doesn't hurt.

What makes a chinchilla a rescue animal?
It is a very common belief that all rescues were neglected or abused in one way or another. This is not the case. While some of the animals in a rescue were mistreated, most were actually owner surrenders. This means that the owner could no longer care for the chinchilla for one of the many reasons listed previously. Instead of dumping the animal somewhere or spending hours upon hours trying to figure out which person is a good match for the pet, they simply chose to take the chinchilla to a rescue where people with more experience will care for the animal and look for a new home for it. Many rescue animals are perfectly healthy with wonderful temperaments.

Where do the chinchillas come from?
Rescue chinchillas often come from their owners (owner surrender). Some rescues actively advertise their rescue on the many online ad sites or have a website of their own. Others also watch the ads for people who are backed into a corner, so to speak, and are desperate to find a new home for their chinchilla. Some rescues will pay for the chinchilla, but most have limited budgets and cannot afford to do so. This does not mean that the rescue is not a good one. It just means that they watch their finances closely and try to keep a vet fund available if any of the chinchillas need medical treatment. Another source of rescue chinchillas is from veterinarians or animal shelters who have contacted the rescue about animals that were abandoned at their facility.

Are there any fees to either surrender of adopt?
Most rescues do not charge a fee to surrender a chinchilla. As for adopting, fees usually run from $50 to $100. Even though the rescue did not pay for the chinchilla, this does not mean that the rescue should just give it away. Adoption fees are charged in order to offset the cost of the chinchilla's care and any vet bills.

How long do the animals stay at the rescue?
The rescue should keep the chinchilla a minimum of thirty days to be sure that it is healthy and to learn what its personality is like. Females that have been exposed to males should remain at the shelter for at least four months in order to rule out pregnancy. If pregnant, females will remain long enough to nurse and wean their babies. It is generally accepted that the babies should be at least six weeks, preferably eight weeks, old before weaning from their mothers. A rescue that adopts out kits under six weeks old should be avoided. Some animals will stay longer due to health or behavioral issues. Older chinchillas often have long stays, too. Some chinchillas will spend the rest of their life at a rescue if the right adopter cannot be found. 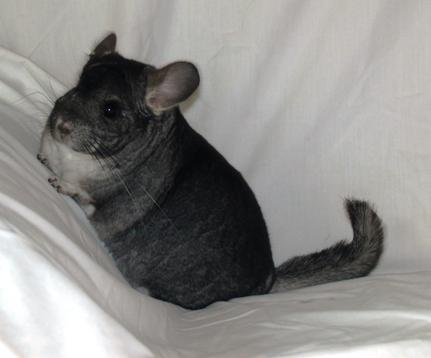 A well cared for chinchilla
Do rescued animals have health or temperament problems?
Although most rescued chinchillas are owner surrenders and are in fine physical and behavioral condition, some animals are in poor physical condition when they arrive at the rescue. Others will also have behavioral issues. A good rescue will not adopt out any animals that have problems. Instead, the chinchilla stays at the rescue until all of the issues have been resolved. If the issues cannot be resolved, the chinchilla will remain at the rescue for the rest of its life. In some cases, such as a severe, painful, non-curable illness or injury, the rescue may opt to have the chinchilla humanely euthanized rather than allow it to suffer.

How are the animals at the rescue cared for?
A rescue should make sure that all of the chinchillas receive the best of care. Cages should be cleaned on a regular basis and appropriate food, hay and water should be supplied at all times. Medical services should be available should the chinchillas need it. Another item that a rescue should supply is daily handling. If the rescues are not handled daily, they can become aggressive to people. Some rescues are operated by chinchilla breeders. The breeders should treat the rescues as well as they treat their breeding herd.

Our rescue
At Cuddle Bug Chinchillas, all rescued chinchillas are treated like our breeding and show animals. It all starts with receiving the chinchilla. This is initiated by either a phone call or email from the chinchilla's owner. Sometimes, the owner receives an email from us offering to take the animal in to our shelter. Arrangements are made for the chinchilla to be brought to our location or to be picked up by us. Once here, the chinchilla is checked over to see if there is any immediate need for medical care. After that, the chinchilla is put in quarantine for a minimum of 30 days. During this time, the chinchilla's health and temperament are monitored and they are switched over to the feed we use. After the quarantine is lifted, the chinchilla is kept in the chinchilla room with the herd. Rescued animals are never allowed to breed and are kept in cages with other rescues of the same gender. Cages are cleaned weekly. Fresh food and hay are given daily as is fresh water. All chinchillas are bathed once a week, more often if necessary. Chew toys are given to all chinchillas when needed. Each chinchilla is weighed daily for the first month and then weekly after that. All chinchillas are handled daily. They are also put on the adoptions page of our website. Animals that have behavior or health issues are kept as long as is required to resolve the problems, for the rest of their lives if necessary. Cuddle Bug Chinchillas charges an adoption fee of $85 for each rescue animal or $150 for a pair. We do not ask for a fee to surrender an animal. We try our best to match rescues with good homes.