The Difference Between Hetero and Homo

General Genetics
When breeding with animals and plants, one of the most basic concepts to understand is that of genes and how they affect the organism. Most living things receive a set of genes from each parent. There ate genes that control every part, such as eye color, hair color and skin color. The inherited genes can be the same; for example, both parents supplying identical eye color genes (both blue), or they can be different, (one parent supplying blue and the other supplying brown). The combination of these genes determines the color of the offspring's eyes; in the first instance blue and in the second brown.

Sometimes there is a problem with one of the copies. This is called a mutation. All colors of chinchillas other than standard gray are mutations. When mutations happen, the second copy often covers up the problem gene and the animal or plant appears to be normal. This is referred to as a recessive gene. It can also happen that the mutated gene is not covered up and the organism displays a new variety of the gene; known as a dominant gene. An example is a new color for eyes or the petals of a flower. All genes from one parent have a counterpart in the genes from the other parent (except for sex linked genes). When referring to the combination of genes from the parents, the terms hetero and home have specific meanings. 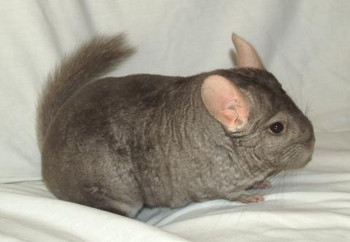 A hetero beige chinchillla.
This animal has one copy of the beige gene.
Recall the example of eye color in humans. When the parents each supply the same gene for eye color, one blue from each parent, the person is considered homozygous (homo) for that gene. If the parents supply two different eye color genes, one blue and one brown, the child is considered heterozygous (hetero) for the eye color gene. This applies to any paired set of genes, regardless of trait the gene is for or what the organism is. So, in short, homo means the same or matching genes and hetero means different genes for the same trait.

The Effects on Chinchilla Colors with Dominant Genes

The terms hetero and homo are used quite often in reference to chinchillas, especially with ebony and beige animals. Often, an ebony will be referred to as either hetero or homo based on the shade of fur with homo ebony meaning a jet black animal and hetero meaning any of the lighter shades. This is inaccurate. The ebony color is controlled not by a single gene, but several, making it a cumulative gene rather than a simple single gene that is either present or not. Ebony is more accurately referred to as extra dark, dark, medium or light. 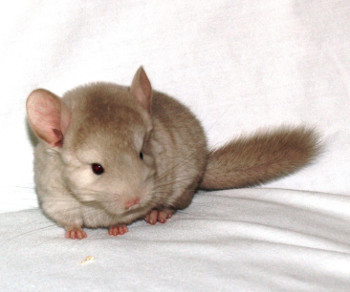 There are two forms of dominant genes that cannot exist in the homozygous state. These are the genes for TOV and mosaic. With these colors, if two copies of either one come together, the resulting offspring either are never conceived of die in the womb. This is known as the lethal factor and it is the reason that breeders will not pair any form of mosaic with another mosaic or any form of TOV with another TOV. However, mosaic and TOV can be paired with each other.

Recessive Genes and Carriers
Another place where homo and hetero come into play is the recessive genes that provide the colors of violet, sapphire and a few other colors. With recessive genes, the chinchilla needs to be homozygous for the trait for the color to be expressed. In other words, both parents need to supply a copy. For example, if the chinchilla is heterozygous for violet it will look like another color but still has the violet gene. This animal is known as a carrier for the trait.

The Importance of Knowing 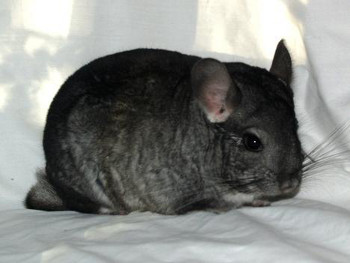 A standard gray violet carrier.
Note, the chinchilla looks like a standard gray,
not a violet. This chinchilla has 1 violet gene.
If the chinchilla is a pet, there is no real importance to knowing whether the animal is hetero or homo for a trait. The importance comes into play when breeding chinchillas. Homozygous animals will always pass on the gene for that color. This makes it very predictable. For example, a homo beige will always produce kits with some form of the beige coloring while the young of a hetero beige can be either beige or standard. So, if the goal is to produce many kits of the same color, a homozygous animal is what is needed. If a variety of colors is desired, then a heterozygous animal is required.

With the recessive colors, the importance lies in knowing whether the animal is heterozygous for the color. The reason for this is simple. A homozygous animal will always pass on the gene. A heterozygous chinchilla (carrier) will pass on the gene only half the time. Breeders will pair a good standard gray with a violet or other recessive color to create standard carriers. These carriers are then paired with other carriers or animals which are homozygous for the trait to produce better quality homozygous animals.