Results and Dangers of Homozygous Lethals Current theory states that homozygous lethals usually cause the death of the organism in the pre-embryonic or embryonic stage of development. The result of this is the birth of fewer babies. Statistically, the number of reabsorbed embryos is about 25%. Although scientific studies of rats and mice indicate this to be the case, studies with chinchillas have not been found. Chinchilla breeders assume this is the case with certain colors of chinchillas since no homozygous chinchillas of those colors have been found through breeding. Additionally, it is assumed that the reabsorbtion of the defective embryos can increase the likelihood of infection in the mother. 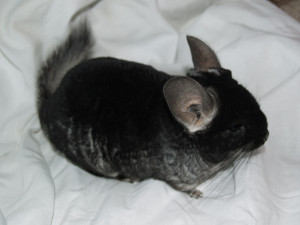 A black velvet chinchilla, also known as the
Gunning Black. This is one of the colors
that appears to carry a lethal factor.
Proof that the Lethal Factor Exists in Chinchillas
When a new color emerged in a herd, breeders would try to breed animals that were homozygous for that color. The reason for this is simple. If an animal is homozygous for the gene that carriers a dominant color, it will always produce offspring with some form of the coloring, making the results of a pairing much easier to predict. The results of these attempts proved, in two colors of chinchillas, that no homozygous animals were being produced. All possible animals were producing offspring that were of the normal color. This would not be possible if the animals were homozygous for the color trait. Additionally, production for the animals involved was reduced by an average of 25%. Pairing the same animals with others of another coloring causes the production to increase back to normal. This has lead to the belief that two mutation colors of chinchillas are associated with lethal genes. As of this date, no breeder has been able to prove otherwise.

The Lethal Factor and Mutation Colors
Two colors of chinchillas appear to have a related lethal factor. These colors are dominant black (also known as black velvet, TOV or the Gunning Black) and dominant white (also known as mosaic or the Wilson White). There are no homozygous chinchillas in either of these colors. Worded differently, all whites and black velvets are heterozygous. When bred, they will produce both their own color and standard gray kits. Since the chinchillas are heterozygous for the trait, there are no associated health problems and the gene is not lethal because the gene is paired with a normal gene, masking its detrimental effects. 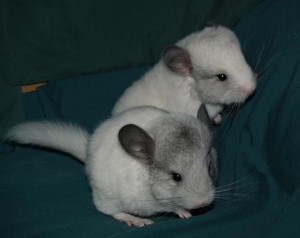 Since the white gene and the velvet gene are two unrelated genes, it is safe to breed a white to a black velvet or any white hybrid to any TOV hybrid.

Until more research is done on the lethal genes in chinchillas, breeding white to white and velvet to velvet. Should be left to the professionals and should not be attempted by a hobby or pet breeder.