For this reason, chinchillas should have access to feed and hay at all times. This is known as free feeding and can be accomplished in a couple of different ways. 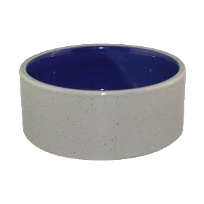 A crock for feeding pellets
First, the chinchilla pellets can be placed in a bowl with enough food to last the chinchilla until the next feeding. At the next feeding, any remaining pellets are thrown out and replaced with enough to last until the next feeding. This is usually done on a daily basis. If the bowl should become empty before the next feeding, add more food to each feeding. Ideally, the bowl should never be empty, but rather have a small amount left over each day. This can be done with a gravity feeder or “J” feeder as well. Bowls and feeders should never be filled with enough food to last several days or weeks. The feed will become stale if left out more than a day or two. Additionally, food left in the bowl or feeder tends to get contaminated with urine and feces. 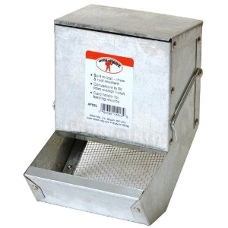 A gravity or "J" feeder
Many feed manufacturers have placed recommendations on the bag labels stating that chinchillas should be fed two tablespoons of feed, per chinchilla, per day. The problem with this recommendation is, for many chinchillas, this will not be enough feed for one day. This leaves the chinchilla without food for a period of time. There is no reason to limit the amount of feed for chinchillas. They do not overeat and will not become obese unless they are fed lots of treats.

Like pellets, hay should also be made available at all times. Hay is necessary to make sure that the chinchilla is getting enough fiber in their diet. It also helps keep the chinchilla’s teeth worn to an appropriate length. Hay can come as loose hay, baled, bagged, or boxed, or it can come as compressed cubes. Several types of hay are currently available. A good guideline to follow is if the chinchilla’s pellets are made with alfalfa, then the hay should be timothy. If the pellets are made with timothy, then the hay should be alfalfa. Other types of hay, such as Bermuda grass and orchard grass, can be fed as treats. Beware of the hays that contain added items such as carrots. In general, the added items are not healthy for your chinchilla.

When feeding hay, it should be free fed. It can be placed in a hay rack, in a bowl, on the shelf, or in some sort of container. One good rule of thumb is to give the chinchilla a large handful of hay every day. If the chinchilla eats all of the hay, more hay is needed. If the chinchilla throws its hay on the floor of the cage, remove the discarded hay and replace it with fresh. Trying to reuse discarded hay is not a good idea. The chinchilla may have urinated on the hay and probably would not eat it even if it has not been contaminated with urine. 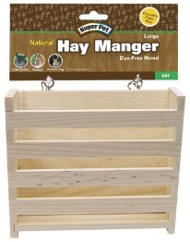 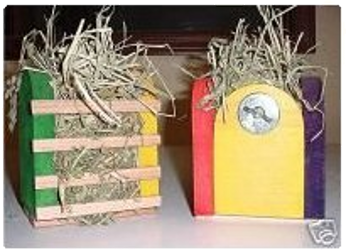 Box type hay hangers
SpecialPrecautions
When selecting equipment for feeding chinchillas, there are some safety issues that need to be considered. Some involve the storage of the feed and hay while others involve the equipment used in the cages.

When storing feed and hay, both should be kept in a cool, dry place. Heat and moisture can destroy chinchilla feed and hay. Additionally, feed and hay need to be in a location where rodents cannot get to it. Feed or hay that has been contaminated with rodent feces or urine can cause serious illness in a chinchilla. Neither feed nor hay should be frozen since thawing will cause condensation which will make the feed or hay soggy and promote the growth of mold and mildew. Only buy enough feed to last no more than six months from the mill date. After that, the feed will rapidly lose much of its nutritional value.

To store feed or hay cubes, it needs to be kept in an airtight container. Depending on the amount needed, this can vary from a plastic, ziplock bag to a large container that seals shut. These containers, called Vittles Vaults, come in various sizes and can be found at pet stores. Glass and plastic are both good materials for storage containers.

Loose hay has different requirements to store it. Hay needs air or it will get moldy and stale. The best way to keep hay is to place it in a large box made of cardboard or wood. The box should have many holes or openings in the sides to allow air to get to the hay. A ventilated hamper can also be used. Hay can last for several months when kept properly. If hay is not stored properly, it can cause serious illness if a chinchilla should eat it.

When purchasing equipment for feeding chinchillas, some considerations need to be kept in mind. First, feeding equipment should be made of metal, ceramic, or glass. Never use plastic. Chinchillas love to chew and will destroy any plastic in or on their cages. Also, if the chinchilla swallows any of the plastic, it can cause an impaction in the chinchilla’s digestive system, possibly killing the animal. 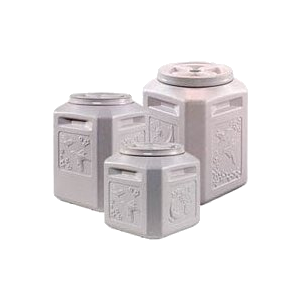 Food dishes should be heavy enough that the chinchilla cannot throw them around the cage. They can be placed on the bottom of the cage or on a shelf higher up. If the dish is on a shelf, it needs to be attached to the shelf or cage in such a manner that prevents the chinchilla from pushing it off of the shelf. This is most important if there is more than one chinchilla in the cage. “J” feeders can be installed on the inside or outside of the cage. A word of warning, small chinchillas and kits can dig out all of the pellets and climb into the feeder. Two things can happen when they do this. One, the chinchilla can become stuck in the feeder and die if not found soon enough. The other possibility arises only when the feeder is attached to the outside of the cage. Attaching to the outside requires a hole to be cut in the cage wire. The feeder is then inserted from the outside with the bowl section inside the cage. This can supply an escape route and allow a chinchilla to get out of the cage through the feeder.

Hay dispensers also have their drawbacks. A hay dispenser should not have plastic parts or parts that can pop apart. Additionally, many hay racks offer the opportunity for the chinchilla to get a leg tangled in the wire. Below are a couple of examples of dangerous hay mangers. The ball or roller type has plastic, can come apart and worse yet, the chinchilla can get a leg caught in the wire causing severe injury to the limb. The hanging metal manger’s design can cause injury when a chinchilla climbs on it or bounces off of it. Legs have been known to become horribly tangled in this type of manger. This usually results in the loss of one or more legs. This type of manger also has parts that stick up. Many a chinchilla has impaled itself on one of these protrusions. 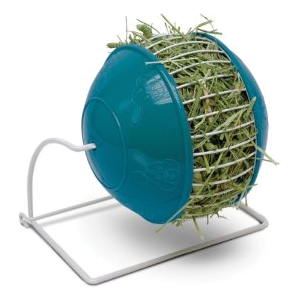 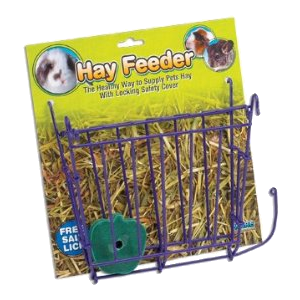