Like any other mammal, chinchillas require regular bathing to keep their fur in good condition. This is because their bodies excrete oils which keep the skin supple. These oils collect in the fur of the chinchilla making them greasy. Bathing removes those oils from the fur. However, bathing chinchillas is not the same as bathing the family dog. In the wild, chinchillas bathe in small patches of volcanic dust or ash. Domesticated chinchillas do not have access to the resources that wild chinchillas do so ranchers tried many substances to bathe their chinchillas eventually finding a couple of items that work as well or even better than what they have in nature. 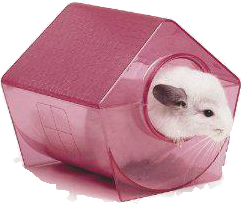 A plastic bath house can be
purchased at most pet stores.
Since chinchillas do not take baths in water, they use a special dust made of a certain kind of crushed volcanic rock. The dust absorbs the oils in the fur and on the skin. Two brands of dust come highly recommended. They are Blue Cloud and Blue Sparkle. Blue Cloud can be found at many pet stores or online and Blue Sparkle can be found online. Both dusts can also be purchased from a breeder. Other brands that are not labeled with Blue Cloud or Blue Sparkle should not be used. Most of them are some sort of sand and can damage the chinchilla’s coat while still leaving it greasy. The difference between Blue Cloud and Blue Sparkle are minor. Blue Cloud is finer than Blue Sparkle and more expensive. It is believed that the finer dust is the best at cleaning the fur and keeping the coat in good condition. Blue Sparkle contains small particles of mica which gives the chinchilla’s coat a sparkle for a short time after bathing.

Proper dust is not the only thing needed to bathe chinchillas. A chinchilla duster is necessary. The dusters that ranchers use is typically a metal box that is open on one side. Dust is placed in the bottom of the duster which is then put into the chinchilla’s cage. Other items can be used in place of the metal duster. Some suggestions include a plastic shoe box, a one gallon glass fish bowl, or a one gallon pickle jar. Store bought, house shaped, plastic dusters are available and are fine for use. Never leave a plastic duster in the cage for more than the time it takes the chinchilla to bathe. If the chinchilla chews on the plastic and swallows some, it could cause a blockage in the chinchilla’s intestines. This could be deadly. Some stores sell ceramic dusters which look like cute little animals. They are not recommended since even the largest of these are too small for an adult chinchilla to properly bathe.

How to Give the Bath 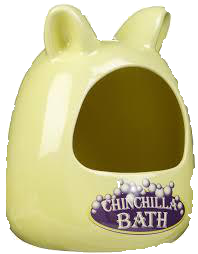 This ceramic house is too small
for a chinchilla to properly bathe.
To bathe the chinchilla, put about a cup of dust in the bottom of the bath house, more if you bathe more than one chinchilla at a time. Always make sure that the chinchilla is not wet or has something sticky in its fur. The bath house can then be put into the chinchilla’s cage. The chinchillas should hop right in and start flipping and twirling around inside the house coating all parts of them with dust. If they do not begin dusting on their own, leave the room for ten to fifteen minutes. This usually works to get them dusting. The reason for this is that while bathing, the chinchillas feel vulnerable causing them to wait until they feel safe. In either case, remove the bath house after ten to fifteen minutes. Any longer, and the dust will get contaminated with feces and urine. The dust can be sifted to remove feces. If, however, the chinchilla urinates in the dust, it will need to be replaced immediately. Store the dust in a dry location to keep moisture from ruining it. Dust can be reused as long as it is clean, free of urine and has not become grainy. Grainy dust has absorbed all the oils it can and is useless. 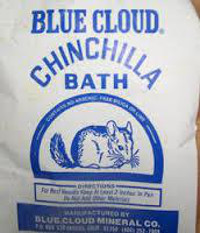 A 50 pound bag of the most
recommended brand of dust
for bathing chinchillas.
How often should a chinchilla be allowed to bathe? It depends on the environment. If the chinchilla is kept in an area that has a low humidity, fewer baths are needed. High humidity creates a need for more frequent baths. Another thing that impacts the frequency of the baths is the amount of handling a chinchilla receives. When chinchillas are handled, anything on the hands of the person holding the chinchilla will be transferred to the chinchilla’s fur, leaving them greasy. When this happens, just give the chinchilla a quick bath and the fur will return to normal. In general, a chinchilla should be bathed a minimum of once a week. If the chinchilla’s fur begins looking greasy, add additional baths. Extremely humid areas may require daily baths. When a chinchilla does not receive enough baths, the fur will begin to mat which is very uncomfortable for them.

Alternatives/Allergies
Some chinchilla owners find that they are allergic to the chinchilla dust. Substituting other material for the dust may relieve the allergy symptoms. Cornstarch and has been used with some success. Another alternative is a product used to keep horse stalls smelling good. It is called Sweet PDZ and is available at most feed or farm supply stores. Each of these items should be used in the same manner as the regular dust. Note: ash from a fireplace or barbeque and talcum powder should never be used to bathe a chinchilla.

Over Dusting
It is possible to bathe a chinchilla too frequently. When this happens the chinchilla’s skin will become dry and itchy. The chinchilla will be seen constantly scratching itself. The ears and feet will become dry. Dry ears look irritated and often have small bumps on them. Dry feet can crack and bleed. If these things happen, the chinchilla needs to take fewer baths than it was receiving.

New Mother and Kits
When a female chinchilla gives birth, she can get quite messy. Chinchillas eat the afterbirth to get nutrients from it and to hide evidence of the birth. This can cause some parts of the mother to be covered in blood. Once she is done with the birth, allow her to clean herself and the babies. Once everyone is dry, offer the mother a dust bath. The kits can remain in the cage for the first few baths. Once the kits can get around fairly well, allow them to join their mother in the bath. Make sure that the bath is big enough for the mother to roll around without crushing her babies beneath her. The kits may just sit in a corner and watch their mother for a few weeks. This is fine; just keep offering the bath. Eventually, the little ones will figure out what they need to do.

Water Baths
Under normal circumstances, a chinchilla should not need to take a water bath. Conditions which could cause a need for a water bath include syringe food or medicine matted into the fur, urinary incontinence, severe diarrhea and the chinchilla getting something sticky or oily in its fur that will not come out or will be made worse with a dust bath.

Injuries
When a chinchilla is injured or has had surgery, care must be taken to keep the wound clean. For this reason, it is best to wait until the entire site has scabbed over before allowing the chinchilla to bathe. This, along with keeping the cage clean, will help keep the wound from becoming infected.