Since chinchillas hide illness and injury so well, it is a good idea if the chinchilla is weighed on a regular basis. Weight loss can often be the first sign that something is wrong with the chinchilla. It can also indicate if kits are not growing well or if the mother has too little milk or none at all. Another purpose for weighing is to supply the veterinarian with a record of the chinchilla’s decline.

Equipment
An expensive scale in is not necessary to weigh a chinchilla. Many chinchilla owners go to the local department store and find perfectly fine scales in the kitchen section. The scale needs to have an option for switching from ounces to grams. Grams are used when weighing chinchillas because they are a smaller unit. This helps to show a change much sooner than the much larger measurement in ounces would. If the scale does not have a container in which to put the chinchilla, a small bowl, box or cage can be used. A small notebook should be used to record the weight of the chinchilla and the date of the measurement. 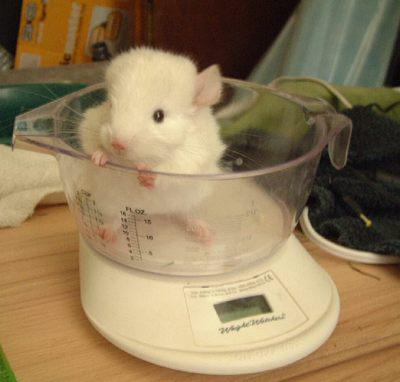 Frequency
Weighing chinchillas does not achieve much unless it is done regularly. One weight here and another weigh there does nothing to establish a normal weight for the chinchilla. Weighing should be done on a regular schedule such as weekly or monthly. The more frequently weighing is done, the easier it is to see a drop in weight. Chinchillas should be weighed weekly, but if that can not be done, monthly is good. Make sure that the weights are taken at the same time of day each time. Regardless of whether monthly or weekly weights are being taken, they should be done on the same day of the week and at the same time of day to ensure that eating, drinking or bodily functions do not cause an apparent spike one way or the other. An adult chinchilla can loose up to 10 grams in just a few seconds if they have just emptied their bladder. Likewise, if the chinchilla has just eaten or had a drink of water, the weight can be 5 to 10 grams heavier.

There are some circumstances where a chinchilla should be weighed more frequently. These include sick chinchillas and newborns. Sick chinchillas need to be weighed on a daily basis in order to ascertain if the chinchilla is getting better or worse. Kits should be weighed daily. Weighing them is a good way to know if the mother’s milk has come in. If it has not, the kits will loose weight. Another reason to weigh the kits is to find out if any of the kits are being bullied and not allowed to eat by their siblings. Kits should be weighed until 1 to weeks after they are weaned from their mother. This is to help the owner know if the kit is having problems eating or drinking on its own.

Kits also vary in weight but not as much as the adults do. A newborn kit can weigh from 30 grams to 60 grams. Occasionally, kits are born weighing less than 30 grams. Unfortunately, these tiny kits do not live long. Kits have also been born weighing in at 60 grams or more. These large kits are usually from a litter of just the one kit. Large kits can cause problem at delivery simply by being too large for the mother to pass successfully. After the mother’s milk comes in, kits should gain 2 to 3 grams a day. As they get older, they can gain as much as 5 to 10 grams a day.


Following is a graph of the weights for 91 kits from birth to 4 months old. The pink and blue line is the highest weight recorded for that day. The blue and red line indicates the lowest recorded weight. The line in the center is the average weight of all 91 kits. The spikes represent dates that have a value outside of the normal range. 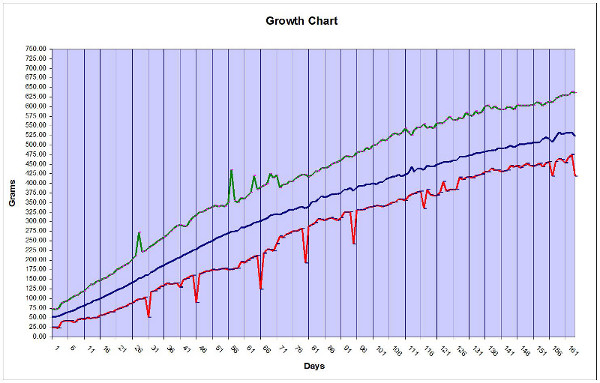