Nibbling
Biting
How to Handle Biting
A Special Case and Warning

Chinchillas are a variety of rodent. Rodents of all kinds chew, nibble and bite. All three are perfectly normal behaviors for a chinchilla. The differences are the manner and circumstances surrounding the incidence. Chewing, of course, is usually done while eating or using chew toys. Chinchillas do not sit and chew on people in the way they would their food or toys. This is due to the fact that they do not consider humans to be food. 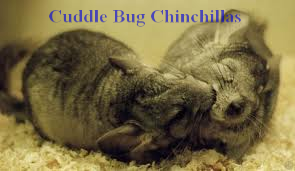 A chinchilla grooming its cage mate
Nibbling is different from chewing. Nibbling is small, usually gentle, bites, often repeated several times in the same area. Chinchillas nibble for a variety of reasons. Like human toddlers, chinchillas use their mouths to explore their world. They will nibble and taste anything that comes within reach, including people. These nibbles are purely exploratory and seldom hurt. If the nibbling does hurt, it is simply because the chinchilla has not learned how hard is too hard. Young chinchillas are more likely to explore by nibbling than adults and are more likely to nibble a little too hard. 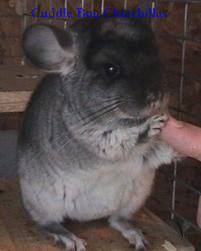 This chinchilla is grooming
his owners fingernails
Another form of nibbling is grooming. Grooming consists of a series of nibbles, usually to the fur, whiskers or face of another chinchilla. Mothers will groom their kits to keep them clean and adult chinchillas will often groom each other. The dominant chinchilla in a pair or group will also groom the whiskers of the others. This is often done to the point of chewing the subordinate chinchilla’s whiskers down to be considerably shorter than those of the chinchilla doing the grooming. This does not hurt the chinchilla in any way and the whiskers will grow back. When being handled by humans, a chinchilla that feels comfortable and safe will often treat that human like another chinchilla and begin to groom them. Grooming people can involve nibbling on fingers, finger nails, skin, hair, noses, clothing, etc. Grooming should not hurt. Chinchillas of all ages groom each other and their people. Note: Chinchillas should not be allowed to chew off pieces of finger nails or clothing and swallow them. This could do serious harm to their digestive system.

If, at any time, a chinchilla nibbles hard enough to cause pain, immediately tap them lightly on the nose and say “no” in a firm but calm voice. Chinchillas do learn quickly and only a few instances are necessary to teach them how hard is too hard.

Biting
Biting is different from nibbling or grooming. It is either a defensive or aggressive act. A frightened or angry chinchilla will bite. This can happen when a chinchilla is new, pushed too far, not properly socialized, mistreated, or fighting with another chinchilla. A chinchilla bite can be quite severe and is very painful. As soon as possible, thoroughly clean the wound and apply an antibiotic ointment. If the bite does not stop bleeding, a trip to the doctor for stitches may be necessary. 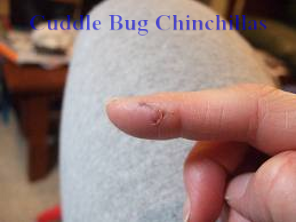 A chinchilla bite
Chinchillas that are new to their surroundings can become frightened by sudden movements, new sounds and smells. Time must be taken to allow the chinchilla to settle into their new home without being chased around its cage and/or scooped up and forced to be held. Biting is often preceded by attempts to avoid capture, grunting, kacking and either lunging or standing up on its hind legs. To prevent this, do not push the chinchilla but rather give the chinchilla a few days by itself and proceed slowly with its handling. Rushing the process can make a biter out of even the sweetest chinchilla.

Chinchillas that are not properly socialized can become biters. When chinchillas are left for long periods without attention from humans, they can become aggressive and bite anyone who tries to handle them. Additionally, if a chinchilla is not used to children, they can become quite frightened by them. Children often are louder and move more suddenly than adults. This combination can be terrifying to an animal that is not accustomed to the presence of children.

Mistreated chinchillas often bite to avoid the mistreatment. Until they are used to their new surroundings and family, they will not understand that they are not going to get hurt again. These chinchillas usually take much longer to become tame (often months) than chinchillas that were not mistreated. Love, kindness, and patience are the keys with these poor animals.

The final reason a chinchilla may bite is if it already angry due to fighting with another chinchilla. Care must be taken when separating fighting chinchillas. Hands and fingers often get mistaken for the other chinchilla and will get bit. That being said, do not wait too long to separate fighting animals. Chinchillas are quite capable of inflicting serious injury to each other in just seconds, possibly resulting in the death of one or both animals.

How to Handle Biting
The best method to handle biting is to avoid the circumstances that cause it. When chinchillas are properly handled, tamed, and socialized, they do not bite unless provoked. Young chinchillas should be taught early how hard a nibble is acceptable by lightly tapping the nose and firmly saying “no”. Repeat this with any painful nibble until the chinchilla begins to use softer nibbles. Never use a raised voice or hit the chinchilla. This will cause an increase in biting and will make the chinchilla afraid of people.

A pair of leather gloves can
prevent injury from a bite
Another method that is a little easier on hands and fingers is to wear leather gloves when handling a biter. After a few bites into the leather without a reaction, the chinchilla should stop biting. Depending on the reason the chinchilla is biting it can take a few days to several weeks to put an end to the biting.