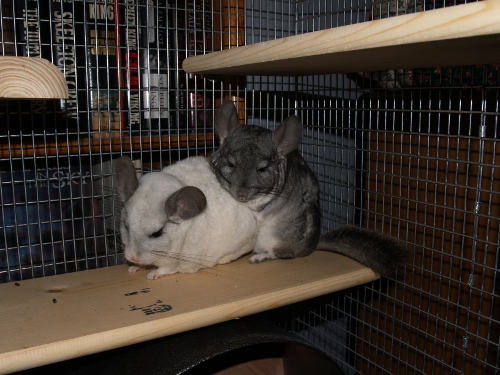 A mosaic and a standard grey chichilla
The best way to make sure that two chinchillas don’t fight is to adopt two chinchillas from the same litter, two boys or two girls. Siblings rarely fight. A male and a female from the same litter is not recommended. If breeding is the intention, the male and female should not be related to each other and should be kept separate until they are of breeding age. The second best option is adopting two unrelated chinchillas who are very young. Young chinchillas are usually more willing to share their cage than older chinchillas. If neither of these options are possible, introducing an adult to a kit or two adult chinchillas can be done. Whether the chinchillas are a same sex pair or a possible breeding pair, the introductions need to be done carefully. Done improperly, introductions can result in severe injuries and even death to one or both chinchillas.

Quarantine
If your chinchillas were not originally cage mates, (bought from different breeders or stores, or bought from the same breeder at different times) begin by quarantining your chinchillas in separate cages. Place each cage in a separate room. Do not allow them to interact with each other for 30 days. The quarantine is necessary to allow your new pet to become accustomed to the bacteria that are naturally present in their new environment. It also prevents the new chinchilla from possibly passing diseases on to the chinchillas already in the residence. If your chinchillas were already cage mates or came from the same breeder at the same time, quarantine will not be necessary. Once quarantine is over, the process of introducing the chinchillas can begin. Five methods exist for introducing chinchillas. They include side by side cages, cage within a cage, playtime introductions, car rides, and the smoosh method. There are pros and cons to each method.

Side by Side Cages
This method involves two cages. The first step in this method is to place the cages next to each other, spaced far enough apart that the chinchillas can not reach each other through the bars. The cages should remain next to each other for at least a week or two. At the end of this time, if the chinchillas appear to be getting along with each other, and are not barking or fighting through the bars, put a dab of vanilla on each chinchilla’s nose and just above their tails. Then place the bossier (more dominant) chinchilla in the other chinchilla’s cage. This should be done when sufficient time is available to watch the chinchillas constantly for the first couple of days. Keep an eye on the chinchillas and separate them if they begin fighting. Some chasing and dominance humping may occur. This is normal. Excessive fighting can and will include lots of chasing, pulling fur, barking and biting.

If fighting does occur, try switching cages, every day or two, without cleaning them. In this way, the chinchillas can get used to each other’s scent. After a week or so, try again. It can take months of trying before the chinchillas accept each other.

An additional step to this method is placing the chinchillas in a freshly cleaned cage that does not have the scent of either one, making sure that the shelves, houses, etc, are rearranged so that neither chinchilla feels the need to protect their territory. The pros for this method are that it gives plenty of time for the chinchillas to get to know each other and is usually fairly stress free. It does, however, require a good deal of time. 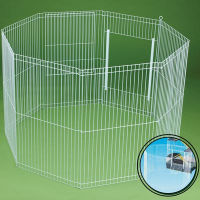 The next method involves introducing the chinchillas through shared playtime. The area for playtime introductions should be a chinchilla proofed room or a play pen made for small animals. Supply the chinchillas with a dust bath, lots of chew toys, and things on which to climb and jump. Tunnels and boxes can supply places for the chinchillas to explore or hide from each other. Release both chinchillas into the area. Allow them to play and explore for a short time. It is best to end the session before they begin to show aggression to each other so start with short periods of time. Ten to fifteen minutes will be long enough to begin with. Repeat this for several days or even weeks, lengthening the time by a few minutes each session. If the chinchillas begin to aggressively chase each other or fight, remove them from the play area and put them back in their cages. Start over with a shorter period of time after a break of a few days. Always supervise the chinchillas while they are out for playtime. A fight could break out in a matter of seconds and could be deadly before you get back to the play area. After several sessions, if the chinchillas are no longer showing any form of aggression toward each other, they can be placed in a freshly cleaned cage together. Keep a close eye on the chinchillas for several days in case fighting occurs and be prepared to separate if necessary. This method can be a lot of fun, but it also gives the chinchillas the opportunity to seriously injure each other since it may be harder to catch the chinchillas and separate them if fighting does happen. 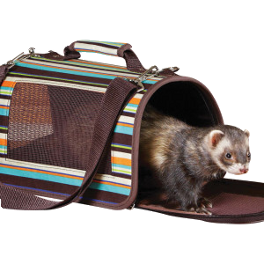 A small pet carrier
The car ride method involves a small carrier. Both chinchillas are placed into the carrier and then, carrier and all, are taken for a short car ride together. The ride should be long enough for the chinchillas to fall asleep, about fifteen to thirty minutes. Chinchillas tend to fall asleep when they travel and will ignore each other. It is believed the stress of the car ride upsets the chinchillas enough to make them either ignore the stranger or bond with each other. It is advisable to have two people for this method. This way, if the chinchillas attack each other, there is someone other than the driver to handle the situation. After the ride, place the chinchillas in the same cage together. Keep a close eye on them and watch for signs of fighting. This method can be repeated several times. This method is very quick, but it also can be deceptive. The chinchillas may be fine in during the ride, but as soon as they are placed in a cage together and have had ample time to recover from the stress, they may decide they do not want to be together and begin fighting.

Smoosh Method
Last is the smoosh method. This involves the use of a small cage, just barely big enough for both chinchillas to turn around and big enough for them to be able to crawl over each other to get to the other side. The chinchillas are placed in the cage at the same time. They are left in the cage for no more than fifteen minutes. Any longer can cause the chinchillas to overheat and a fight is sure to break out. Additionally, longer than fifteen minutes is cruel. Once the fifteen minutes is up, remove the chinchillas from the cage, put a dab of vanilla on each chinchilla’s nose and just above their tails and place them in a clean, neutral cage. As always, keep a close eye on the chinchillas for several days to watch for signs of fighting. Again, as with the car ride method, this one is quick, but the chins can be fine at first and later decide to fight.

With all of these methods, it is best to supply each chinchilla with a place to hide from the other chinchilla. The hides can be houses, tunnels or tubes or any combination of them. It is also wise to supply two of everything in the cage. Two houses, two tunnels, two food bowls and two water bottles. This will help if one of the chinchillas bullies the other and does not allow him access to these items. More information on bullying can be found in the section on dominance.

Often, if one method does not work, a different method can be tried and used successfully. Other times, two chinchillas will not like each other no matter what you do. In this case, do not force the issue. The choices in this situation are either housing them in separate cages, finding a new home for one, or returning one of the chinchillas (if the breeder or pet shop will allow this). A sure sign that the chinchillas need to be permanently separated is injury. Any time a chinchilla draws blood, it should be permanently separated from the chinchilla it attacked. Sometimes, the attacker can be paired with a different chinchilla, but often, this is not the case and the attacker will need to remain a single chinchilla. Keep in mind, chinchillas can change their minds at any time and decide they no longer like each other. Pairs that have been together for years can suddenly turn on each other. It is for this reason that chinchilla owners should always have a spare cage on hand.