One decision many people have to make when acquiring a chinchilla is whether to get a male or a female.

First, in chinchillas, the male and female do not have different personalities based on their gender. Rather, each chin has their own, unique personality. That said, there are some differences in their care. For the female, if you intend to breed chinchillas, there is choice of a mate, introductions and the following pregnancy, delivery and care of the kits to be concerned with. Additionally, some, but not all, female chinchillas spray urine when frightened or angry. They have been known to spray as far as ten feet with incredible accuracy. Male chinchillas have also been known to spray, though nowhere near as far or as accurately. The most important difference with the males is that they occasionally get hair rings around their penises. This can be very painful and potentially harmful to the chinchilla. For this reason, hair ring checks must be done once a month and any offending hair needs to be carefully removed. Occasionally, the male will clean the area himself (which can be quite embarrassing to any company visiting at that moment). This does not mean, however, that hair ring checks can be skipped.

Pet shops often make mistakes and a new chinchilla owner finds out by accident (such as the birth of kits or a “male” spraying) that their new little friend is not the sex they were told it was. To help resolve the confusion, pictures of both male and female chinchillas have been provided. It is not offensive to check for yourself when deciding to purchase a chin. Unlike many people may suggest it is possible to tell the sex of even the newest of kits. These pictures (provided by Alecia of DMAL Chins) are of two kits that are only a few weeks old.


Following are pictures that show what a male chinchilla should look like. 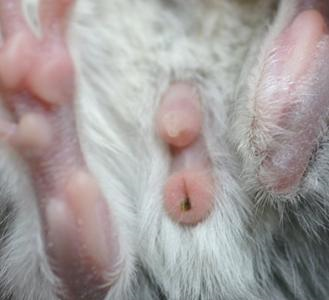 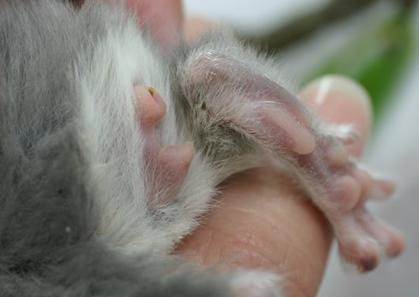 Note the gap between the anus and the base of the urethral cone. Males also have a slit at the tip to allow the penis to be exposed.

And now for the female. 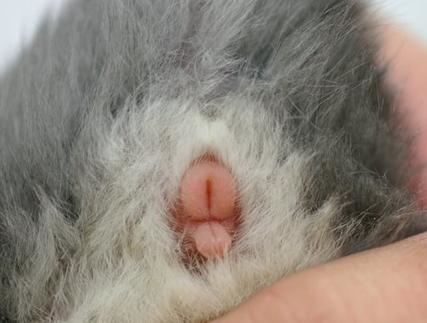 Thank you Alecia of DMAL Chins for the wonderful pictures.