An option for keeping the chinchilla cage clean is fleece liners combined with a “litter box”. Many, but not all, chinchillas can be potty trained. The process of potty training is quite simple and requires very few supplies. Using fleece liners has many advantages and a few disadvantages. There are also some concerns to keep in mind if fleece liners are used. 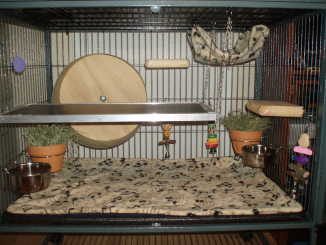 A cage equiped with a fleece liner
With this method, cage liners are made out of several layers of fleece and secured in the bottom of the cage. A glass or metal baking dish is used for the litter box. Glass or metal is used because chinchillas will chew on plastic litter boxes, which can cause serious medical problems. Additionally, glass and metal can be sanitized very easily while plastic can not. 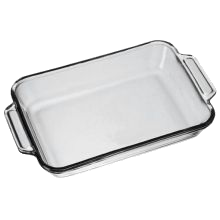 A glass baking dish
Keep in mind that the litter box will only help with urination; not bowel movements. Chinchillas cannot control their bowels so a potty trained chinchilla will continue to defecate all over their cage. Many owners use a Dust Buster® to vacuum the poop on a daily basis. Additionally, the liners should be washed every week unless the chinchilla has accidents on the liner. In that case, the liners should be washed every two to three days. Fleece liners can be cleaned in a regular household washing machine and dryer. Wash them in hot water and add a cup of vinegar to help remove any smell. Do not use fabric softener. It will cause the urine to puddle on top of the liner instead of being absorbed by it. It is a good idea to clean the pan itself any time the fleece liners are changed. Since the liner will need to be washed and dried, it is recommended to have at least two for each cage. Some owners use fleece liners without a litter pan. In this case, the liner needs to be changed more often or the liner will begin to smell.

Fleece liners have a few advantages over the use of other types of cage bedding. One of these advantages is that chinchillas cannot throw or kick the bedding out of the cage. Both wood shavings and recycled products can end up all over the floor surrounding the cage when the chinchilla is active requiring a minimum of daily sweeping to keep the area clean. Fleece liners are also a great option for people who are allergic to other bedding materials or those who just do not like the smell of wood shavings. In the long run, fleece liners are the cheapest form of bedding available for chinchillas.

Although there are clear advantages to using fleece cage liners, disadvantages do exist. Fleece liners are by far the most expensive option, initially. Additionally, if the chinchilla has accidents or a litter box is not used, the liners will need to be changed at least every other day or the urine on them will begin to smell. Even though the liners can be washed in a washing machine, it is not recommended to wash them with clothing. Instead, they need to be washed in a separate load, by themselves.