When adult chinchillas wish to make contact with other chinchillas or just talk to each other they make a sound that is somewhere between a squeak and a contented grunt. This sound is relatively quiet and people may have a hard time hearing it.

Content chinchillas will also make very quiet grunting noises that sound like monkey noises and chirping. This vocalization is quite prevalent in kits and mothers with kits, although other adult chinchillas will sometimes make this sound.

Monkey sounds are not the only sound a kit will make. If a kit is held up to an adult, they will often make a series of squeaks. It is believed babies make these sounds to tell the adult that they are just a little baby and to ask the adult to not hurt them.

Another sound that chinchillas make is a mating call. It is best described as series of squeaks. Males often accompany this sound with movements that include wiggling his bottom back and forth and wagging his tail. This behavior is often referred to as the “swishy tail dance” and is used to get the attentions of the female. Sometimes, adult (male and female) chinchillas will do the “swishy tail dance” when they are excited about something.

Annoyed, frightened, or angry chinchillas also can be very vocal. When annoyed or mad, a chinchilla will often “kack”. This sounds just like the word. Chinchillas use this sound to say "back off", "go away", "stop that", or "leave me alone" depending on the circumstances. Often, one chinchilla will be grooming the other and get a little too aggressive, causing the first chinchilla to “kack” at the other to tell him to stop what he just did. Chinchillas will also use this sound to tell their humans to leave them alone. A quieter version of this sound is sometimes made by mother chinchillas when they are calling to, or disciplining their kits.

When a chinchilla is pushed past the “kacking” stage, they may also charge and bite if the offender does not stop. Some chinchillas will even hiss. One thing to note is when a female gets frightened or angry she may “kack” and then rear up on her hind legs, while scooting her bottom forward to spray urine at the offender. This spray can go as far as ten feet and their aim is unbelievable. 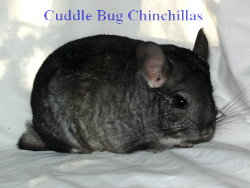 One sound that chinchillas make can scare their owners. This sound is a loud scream. It sounds like the chinchilla is injured, but when checked, there is nothing wrong. Some chinchillas do this in the middle of the night and others never make the sound at all. Why chinchillas do this is a bit of a mystery. One thing, however, is clear. The scream has the effect of bringing the owner running. Since chinchillas are very intelligent creatures they learn quite quickly to scream for attention.

Finally, chinchillas have a warning call that is used to alert the herd. The warning call is a series noises that almost sound like the chinchilla is either laughing or crying. Chinchillas will often make this sound when they appear to be asleep and when their surroundings are quiet. This is because they have heard something that they did not recognize; therefore, they need to warn the herd. Chinchillas do not need to have other chinchillas around to make the warning call. In the case of a lone chinchilla, the herd that they are warning is their human family.

These are not the only sounds chinchillas can make, but they are some of the most prevalent. Through the use of squeaks, grunts, kacking and screaming, chinchillas can communicate their needs and wants to other animals and even humans.

The following link is to a site with recordings of different sounds chinchillas make and their meanings.
http://www.cheekychinchillas.com/chinsounds.html