Contents:
Symptoms
Causes and Prevention
When to See the Veterinarian
Treatment
Medications
Other items needed
Schedule 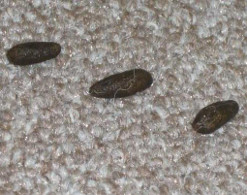 Normal Chinchilla Feces
The symptoms of constipation are fairly easy to see. Normal chinchilla feces should be dark in color, about the size of a Tic Tac or larger, and rounded on both ends. It should not have any smell or be sticky, which could indicate diarrhea. Chinchilla poop that is light in color; small, hard, crumbly, or pointy on the ends are symptoms of constipation. Other symptoms include straining or hunching the back, chirping, or peeping while trying to pass a bowel movement. Keep in mind that chinchillas should be producing feces constantly. Normally, a pile of five or six pieces are produced within a just a few moments of sitting still. If the amount of feces decreases from what is normal for a particular chinchilla, the chinchilla may be constipated. A total lack of feces can indicate a blockage or a serious condition known as stasis.

Causes and Prevention
The causes of constipation are varied and many are fairly easy to prevent. Some of the causes include an improper diet, too many or inappropriate treats, a sudden change of feed, dehydration, illness or pain, stress, lack of exercise, hairballs and the ingestion of a foreign object.

Chinchillas have digestive systems that process a relatively narrow range of food. A proper diet for chinchillas is low fat, low protein, low calorie and high in fiber. This is usually provided through pellets and hay. Anything outside of this range can cause constipation since the chinchilla is not capable of digesting it properly. Chinchillas should always have access to plenty of quality pellets and either loose or cubed hay. When a chinchilla does not get enough fiber in their diet, the digestive system slows down causing constipation. Inappropriate foods that contain sugar and/or high amounts of fat or protein can all have this effect. To help prevent constipation, a chinchilla should always have access to unlimited quality pellets and hay and should not be fed items such as meats, nuts and seeds, vegetables or fruit, or any type of junk food made for humans.

Inappropriate or too many treats can have the same effect as an inappropriate diet. As mentioned previously, chinchillas cannot properly digest any foods that contain fruits, vegetables, nuts, seeds dairy products, or meat. These items should never be used as regular food or treats since they can cause severe digestive issues such as constipation, diarrhea, bloat, blockages and stasis. Additionally, treats that are considered healthy for them, such as cheerios and shredded wheat, can cause problems if too many are fed either over time or all at once. A good rule of thumb is to feed only one or two treats a week. This means one or two total, not one or two of each kind of treat.

Constipation can also be caused by dehydration. Chinchillas need to have access to clean water at all times. If a chinchilla is forced to go without, the digestive system will slow down due to lack of water necessary to process the food. If this is allowed to go on for too

Left to Right: Small, Hard Droppings Indicative
of Constipation; Skinny Droppings with Pinched Ends
Indicating Straining and Difficultly in Passing Stool;
Normal Chinchilla Droppings
long, the chinchilla can develop a blockage which will require the help of a veterinarian, intravenous fluids, and medications. Preventative measures are quite simple in this case. Always be sure that the chinchilla’s water bottle has clean, fresh water and is in working condition. Also be sure that the chinhilla can reach the bottle. Many people hang two bottles in case one malfunctions.

As with people, when a chinchilla is sick or in pain, they often will not eat due to a lack of appetite. This is quite normal. Keep in mind, however, that if a chinchilla goes without food for too long its digestive system will begin to shut down. To avoid this, an immediate trip to the veterinarian for appropriate treatment is necessary. Depending on the problem, medications and/or painkillers may be necessary and the underlying condition addressed. The chinchilla will also need to be force fed until it begins eating on its own. Illness and injury can be avoided to some degree. Make sure that no humans or animals that come in contact with the chinchilla are ill and always make sure hands are washed before handling the chinchilla. Injuries can be avoided by making sure that the chinchilla’s cage and play areas are all chinchilla-proofed.

Chinchillas can be prone to stress. It is usually caused by a change in the chinchilla’s environment. Some changes that can produce stress and therefore trigger a bout of constipation include, but are not limited to, a new cage, moving the cage to a different room, moving to a new home, adding a new cage mate, changes in the home’s routine and an erratic lifestyle. Chinchillas are creatures of habit. Once they become accustomed to a routine, any change can stress them. They will adjust to a change given time; however, it is best to keep a close eye on them and their droppings when changes do occur. If the chinchilla is exposed to an erratic lifestyle and cannot expect any kind of routine, it can suffer from constipation and any of its complications throughout its life. This is not a healthy situation. It would be best if the chinchilla is sent to a home where the routine is more consistent. Prevention of the things that trigger stress is in the best interest of the chinchilla. Frequent changes in the location of the chinchilla’s cage should be avoided. A routine for feeding and playtime should be established. If things are kept consistent for the chinchilla, it is unlikely that stress induced constipation will occur.

Lack of exercise, as with all mammals, can cause a chinchilla to become constipated. When a chinchilla that is used to a living in a large cage, having access to a wheel or saucer, or having out of the cage playtime on a regular basis, is suddenly deprived of these items and is not offered another form of exercise, constipation will most likely be the result. Changes in the amount of exercise should be done gradually to help ease the chinchilla into its new routine.

Chinchillas rarely get hairballs; but when they do, it is necessary to get the help of a veterinarian to remedy the situation. Never try to treat a suspected hairball without the help of a professional. When a chinchilla with a dense coat sheds, it may be necessary to groom them occasionally to lessen the amount of fur that the chinchilla could ingest. 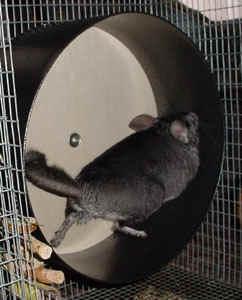 A chinchilla exercising on a wheel
A final cause of constipation in a chinchilla is the ingestion of a foreign object. By nature, chinchillas can and will chew on anything in their reach. Some of the most frequent offenders include, plastic inthe cage, carpet, fabric or thread, wall board and trim, and plastic bags or containers. Anytime a chinchilla ingests any type of foreign object, their fecal output should be monitored for a few days. If the chinchilla shows any signs of constipation during this time, a trip to the veterinarian should be made as soon as possible. To prevent the ingestion of foreign objects, make sure nothing is within reach of the chinchilla’s cage. Chinchilla cages should not contain any plastic shelves or accessories, carpeting, or fabrics other than fleece. Fleece should be removed if the chinchilla begins chewing on it. Cages should not be placed close enough to walls or trim for the chinchilla to reach. A space of a few inches is all that is necessary to prevent the chewing of any item. Store any bags or containers out of reach of the cage and away from the play area. Anytime the chinchilla is out of the cage, it should be closely supervised and in a chinchilla proofed area.

When to See the Veterinarian
If the constipation does not resolve after a couple of days, gets worse, the chinchilla stops eating, or becomes lethargic, it will be necessary to get the chinchilla to a veterinarian that specializes in exotic animals and has experience with chinchillas. As mentioned previously, if the chinchilla is not producing any feces at all, it needs to see a veterinarian as soon as possible. A lack of feces can indicate either a blockage or stasis. A blockage will require intravenous fluids and medications, in addition to the previously mentioned treatment, to help it pass. If it is bad enough, a blockage could require surgery.

Another possible outcome of constipation is digestive stasis. When a chinchilla stops eating for a period of time, their digestives system can shut down completely. The chinchilla will not eat or produce any feces. Once this happens, it is extremely difficult to get the digestive system started again. This is an emergency and the chinchilla needs to see a veterinarian immediately. Often, treating stasis is a long, hard battle that does not end well. There is no way to treat stasis without the help of a veterinarian. In addition to the treatment mentioned for a blockage, the chinchilla will need to be given gas drops since stasis is often accompanied by bloat. Force feeding small amounts, several times a day with a syringe and special recovery food will be necessary in order to get the system moving again and keep the chinchilla alive. An old sock, filled with dry rice, can be heated in the microwave and placed on the chinchilla’s belly to help relieve pain. An example of the treatment is as follows.

Medications:
40 cc’s of subcutaneous fluids - given twice a day
Injectable Reglan - Injectable is recommended since the oral medications are not absorbed until they reach the gut. With a chinchilla in stasis, they may not be absorbing the medications properly or at all. Reglan is a gut stimulant used to get the digestive system working again.
Metacam - Metacam is a pain reliever.
Cisapride - a gut stimulant. Used to get the digestive tract working again. Given every 8 hours.
Simethecone - an anti gas medication. Stasis is often accompanied by bloat (a build up of gas in the digestive system). Given anytime the chinchilla is force fed.
Recovery Food - Critical Care or Essentials for Life. Fed to the chinchilla in small amounts (5 – 10 cc) several times a day for a total of 65 cc or more per day.

Schedule:
Warm compresses and tummy massages throughout the day (every 2 to 3 hours). A typical massage session should last 15 – 30 minutes, followed by 15 minutes of warm compress. 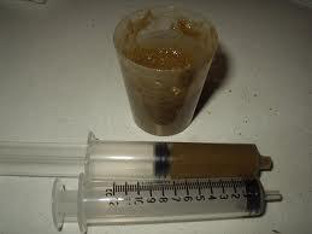 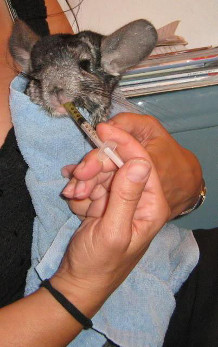 The last complication of constipation, and just as serious, is an intestinal prolapse. An intestinal prolapse is caused by the chinchilla straining hard to have a bowel movement. Occasionally, this will cause the intestines to push out of the anus along with any feces. This is a medical emergency and requires surgery for the chinchilla to survive. There is nothing that can be done at home to help a prolapsed chinchilla. Once a chinchilla prolapses and recovers from the surgery, they will need to be watched for any signs of constipation and be treated immediately when symptoms arise.

As one can see, there can be serious complications to constipation. It is not something that should be ignored or allowed to “run its course”. Constipation should always be taken seriously and treated immediately. The cause of the constipation will also need to be found in order to prevent it from occurring again.