Contents:
Causes
Symptoms
Diagnosis
Treatment
When is it time to say goodbye


What is malocclusion?
By definition, malocclusion is a faulty or irregular contact of opposing teeth in the upper and lower jaws. With chinchillas, this definition has come to include a condition in which the teeth or their roots are overgrown. This can occur in either the upper or lower teeth and can involve either root elongation, crown elongation, or both. The teeth that overgrow can include both the molars and the incisors. Overgrowth can be present with or without misalignment of the teeth. Often, although overgrowth and misalignment are often closely linked, when a chinchilla is diagnosed with malocclusion, the veterinarian is referring to overgrowth of the roots or crowns and not crooked teeth. This is probably because misaligned teeth by themselves do not produce the serious symptoms that overgrowth does. The use of the term malocclusion in this publication is in reference to the issue of overgrowth. Other terms used when discussing chinchilla teeth are points or molar spurs. Both of these terms indicate overgrowth of the back teeth, above the tooth crown line. Points are overgrown teeth that point inward. The points can cut into or trap the tongue. Teeth that overgrow outward create spurs which can cut into the cheek.

Causes
Like rabbits and guinea pigs, chinchillas are hypsodonts. This means that their teeth, both molars and incisors, grow constantly. Chinchillas need to chew on coarse material in 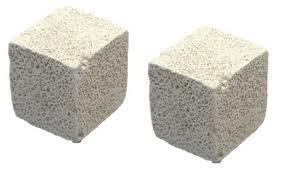 Pumice blocks are an excellent chew toy.
order to keep their teeth worn to the proper length. Unlike rabbits and guinea pigs, when chinchilla teeth overgrow they can reverse direction and the roots will elongate. When this happens, the roots grow up into the sinuses and eye sockets or down through the lower jaw or both. This is extremely painful for the chinchilla and cannot be cured. Since this type of overgrowth is hidden, it is usually quite severe by the time the chinchilla shows any symptoms.

Malocclusion can be genetic, accidental, or environmental. Genetic malocclusion is hereditary. This means that it is passed down through the genes from both parents. Since malocclusion can be hereditary, it is best to pull from breeding any animal that has been diagnosed with it. Both parents should also be removed from breeding before they have the opportunity to pass the genes to more offspring. The parents can carry the gene responsible for the condition without having it themselves. Genetic malocclusion usually shows before the age of five and can occur as early as 1 year of age.

As mentioned, genetic malocclusion normally presents itself within a certain time frame. Accidental malocclusion is not limited in this manner and can happen at any time. Like the name suggests, accidental malocclusion is the result of an accident. If the chinchilla injured its mouth or teeth though an accident, such as biting the cage bars and/or falling and hitting the mouth or jaw, the result can be broken or lost tooth, causing the surrounding teeth to grow out of alignment in order to fill the gap. Additionally, an injury to the jaw that does not produce a gap in the teeth can still cause irregular tooth growth and/or misalignment. This can occur within weeks of the injury or several years later depending on the type and location of the injury. 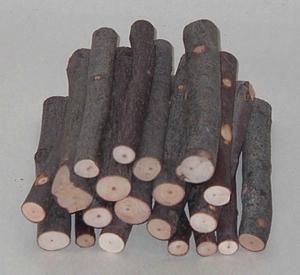 Apple and Pear sticks are a big favorite
for chinchilla chew toys
Environmental factors can also cause malocclusion. This means that the chinchilla’s living conditions are the cause of the problem. The most frequent environmental cause is lack of chew toys or hay. Because of the way their teeth grow, chinchillas need a constant supply of items to chew in order to wear down the teeth and keep them healthy. Pellets alone do not require enough chewing to keep the teeth properly worn down. Hay and chew toys, such as apple wood sticks and pine blocks, are necessary. Another item some chinchillas like to chew on is pumice blocks or pumice stones. A chinchilla that has a constant supply of chew toys and hay is far less likely to develop dental issues than one that is not given any of these items. Chew toys will help keep the front teeth healthy and hay will do the same for the back teeth.

Another environmental cause is poor diet. Lack of calcium and vitamin C can cause dental issues by weakening the teeth and jaw bone. It is important to make sure that the feed a chinchilla is given meets their nutritional needs. Chinchillas should be given a quality chinchilla pellet or a rabbit pellet that is equal in quality and ingredients to the best chinchilla pellets. Never feed bird food, or food meant for guinea pigs, rats, mice, hamsters or gerbils. In addition to the possible dental issues they can cause, they will also cause severe problems in the digestive and other systems of a chinchilla. Fruits and other sugary treats should also be avoided since they can cause dental caries leading to tooth decay and tooth loss along with possible digestive issues.

Symptoms
The symptoms of malocclusion can include the following: 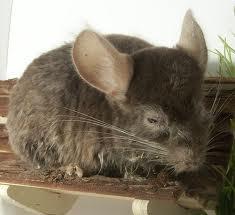 Note the wet, matted fur.
This chinchilla is drooling due
to malocclusion


Often, only a few of these symptoms will be present. The first sign is often weight loss since the pain from the condition causes the chinchilla to eat less or not at all. Frequent pawing at the mouth, tooth grinding, crumbling food and drooling are all symptoms of tooth related pain. Watery eyes can occur and are caused by the roots of the upper jaw growing upward towards the eye socket and blocking the tear ducts. Chinchillas are prey animals and because of this, hide illness and injury until it is often too late to help them. As mentioned previously, weight loss is often the first indication that something is wrong with the chinchilla. For this reason, it is a wise idea to weigh chinchillas on a weekly basis and keep a record of the chinchilla’s weight. This can make it possible to catch malocclusion in the early stages instead of waiting until the animal has been suffering for months.

Diagnosis
In order for the chinchilla to be properly checked for tooth problems, they need to have a full dental evaluation done while the chinchilla is under anesthesia. At this time, x-rays need be taken in order to obtain a full picture of what is going on. If x-rays are not done, it is impossible to know whether or not the roots are involved in the chinchilla’s dental issues. A quick exam of the mouth can not tell the veterinarian what is going on beyond the gum line.

Below are x-rays of both a normal chinchilla and a chinchilla with malocclusion. 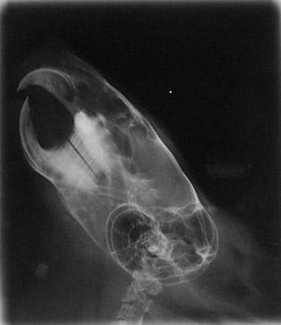 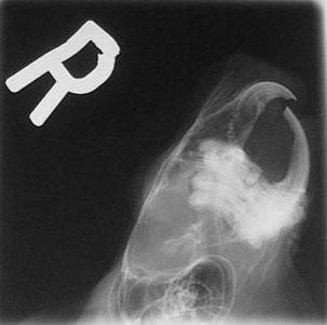 As can be seen, there is a major difference between the chinchilla with normal teeth and the one with malocclusion. The normal x-ray shows teeth meeting in a straight line with little or no curving of either the teeth or the roots. There is no evidence of the roots growing outside of the jaw line.

The maloccluded x-ray shows overgrowth of both the roots and the crowns. There is no clear line where the upper and lower teeth meet. Also, the roots are growing both out of the lower jaw and into the eye sockets.

Treatment
If the malocclusion is limited to overgrown crowns, points, or spurs, a veterinarian who has experience with chinchilla teeth can trim them while the chinchilla is under anesthesia. Chinchilla teeth should never be clipped, but should be ground down with a special tool. Clipping will crack the teeth and cause more problems. Sometimes, one treatment is all that is necessary. However, more often than not, the chinchilla will need to have the teeth trimmed repeatedly over a period of time and for the rest of its life. Each treatment requires anesthesia and a recovery period that often includes pain medications and forced feedings with a syringe several times a day. If frequent trimmings are necessary, it may be best to consider the chinchilla’s quality of life and possible euthanasia. Remember, there is no cure for malocclusion, only management of the symptoms.

For overgrown roots, there is no treatment, other than pain relief. This can help for a period of time, but eventually, the chinchilla will reach a point where there is no humane option other than euthanasia.

When is it time to say goodbye?
Malocclusion is an extremely painful condition. Pain management can help as can trimming the teeth when appropriate. Regardless of the form of malocclusion, there will come a time when the chinchilla spends too much time in pain and needs to be euthanized. A good guide to judge when the time has come is to ask whether or not the chinchilla is still enjoying the things that a happy chinchilla does. These items include eating, drinking, running, jumping, chewing, and bouncing around the cage. If the chinchilla is not participating in these activities, it is time to say goodbye. When chinchilla is spending a lot of time drugged, being force fed, or in pain, the only humane option is euthanasia.