How to Chin Proof Cords 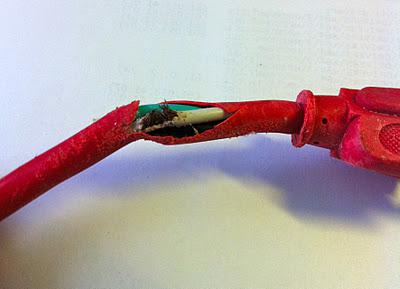 This is a chewed extension cord.
It only takes seconds for a chinchilla to do this type of damage. 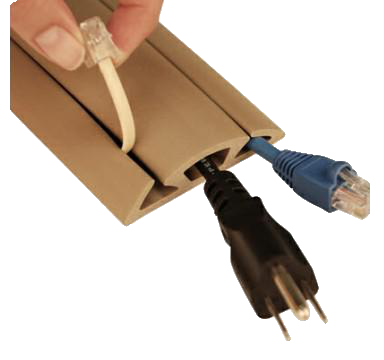 Walls and Trim Because chinchillas love to chew, walls and trim should be protected. Many people use a small animal play pen to allow their chinchillas to play safely. These are available online or at pet stores. Be aware, chinchillas can jump over these and once they jump it, they will never forget that they can and they will not stop trying. Some manufacturers make covers for the playpens. Another option is to block off any hazards with cardboard. This can be done by taking apart large boxes and spreading them out along the walls and furniture. The individual pieces of cardboard can be taped together to keep them from separating. Put the tape on the outside of the cardboard. This will help keep the chinchilla from eating the tape. If walls and trim are not protected, serious damage to the walls and trim can and will be the result. Chinchillas have been known to peel the paint and surface paper off of the walls. Baseboards and trim work are also big favorites when it comes to chewing. 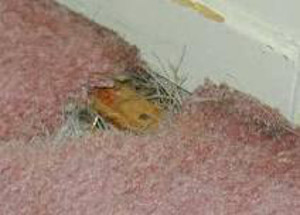 This damage was done by a chinchilla
that was not properly supervised.
Carpet
Although not common, chewing on carpeting can cause digestive and other health problems such as an intestinal blockage and poisoning. If a chinchilla ingests the carpet fibers, they can form a solid mass blocking off the chinchilla’s intestines. This is deadly if not treated. Also, the carpet backing, dyes, and fibers can be poisonous to the chinchilla. It is best to have the chinchilla play in a room that is not carpeted. When forced to use a carpeted area, keep a close eye on the chinchilla and immediately stop any chewing the chinchillas may be doing. If the chinchilla persists in chewing on the carpet, another location for playtime should be found. One such solution is to by a small animal playpen that comes with a bottom.

Closets and Doors
When a chinchilla is out playing, all doors to adjacent rooms and closets should be closed and remain so until the chinchilla is safely back in its cage. This serves three purposes. First, it keeps the chinchilla from escaping into other parts of the home or from getting outside. Both of which are places that can be hard to find and catch the chinchilla. Additionally, should the chinchilla get out of the room, it could be stepped on, squished between doors and walls or between items in the closet, or injured when hiding inside a recliner when it changes positions. Many owners have accidently killed their chinchilla trying to get them out of heavy furniture and closets full of heavy or sharp objects. Lastly, if all the doors are closed, other animals, such as dogs and cats, cannot get to the chinchilla to harm it, intentionally or accidently. 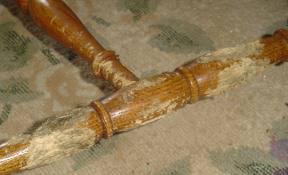 Wooden furniture parts a can become a
favorite chew toy for a curious chinchilla.
A popular play area for chinchillas is the bathroom. This is fine as long as some precautions are taken. Make sure the tub is empty and the toilet lid is closed. Although the chinchilla will not die if it jumps into a full tub or open toilet, it does take a long time to get the animal thoroughly dry. There is also the risk of drowning.

As part of chinchilla proofing a bathroom, items such as soap, shampoo, hair products, cleaning products, etc. should be put out of the chinchilla’s reach. It only takes a few seconds for a chinchilla to chew a hole in a bottle or to take a healthy bite out of a bar of soap. Most products kept in the bathroom are toxic and if the chinchilla swallows any, it could kill them.

Recliners and Other Furniture
Furniture can pose problems if the chinchilla either chews on it or hides under, behind or in it. Chinchillas will chew anything that they find. They should be kept from getting access to either fabric or wooden furniture. Chewing on the fabric could cause digestive problems and chewing on the finished wood could cause poisoning due to the finish. They will also get in or around large pieces of furniture like sofas and recliners. As mentioned previously, chinchillas can be killed by getting trapped in a recliner or crushed by heavy furniture. To protect them from any of these scenarios, a small animal playpen or cardboard blocking access to the furniture can be used. 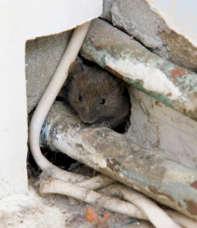 Holes in walls and cabinets can
become a way for a chinchilla
to get into trouble and can
create a route to outside
Holes
If there is a hole somewhere in the home, it is a safe bet that a loose chinchilla will find it. Also, it is amazing how small of a hole a chinchilla can squeeze its way through. Many chinchillas have used small holes to make their way under kitchen and bathroom cabinets and into walls. Often they will not come out if someone is in the room, leaving the owner no recourse other than tearing apart the area where the chinchilla is. For the chinchilla and its owner it is best to avoid this. To make sure there are no holes, get down on hands and knees and thoroughly inspect the entire area for ANY holes. Never assume that the hole is too small. The chinchilla will prove that idea wrong. Once holes have been found, they should be permanently blocked off before the chinchilla is allowed to play in the immediate area.