What is Play Time
Play time is an activity in which the owner spends time playing with the chinchilla outside of its cage. This can be done in any room that has been chin proofed. Holding a chinchilla is not considered playtime. Many chinchilla owners enjoy play time with their chinchilla. However, it is not necessary to have play time; many chinchillas do not get any play time and they are just as happy and healthy as those that do. Play time can be fun for both owner and chinchilla and helps to strengthen the bond between the two. There are many things to think about before having play time, including the location, safety, temperature, supervision, time, length and frequency of play time, age of the chinchilla, separate play times for each of the genders and vacations. 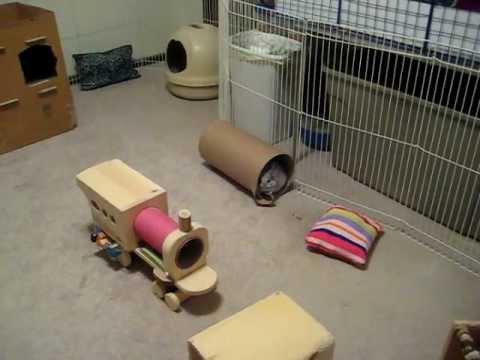 A well thought out play area. Note how the playpen panels are used to
keep the chinchilla out of dangerous areas. Safe toys are also in use.
Play time can be done anywhere inside the home that can be chin proofed. Chin proofing is done in order to keep the chinchilla safe from harm. Once the area is safe, other items need to be addressed. The room where the chinchilla plays needs to be no warmer that 70 degrees, a few degrees lower is even better. Keep in mind that the chinchilla is running and jumping and playing hard wearing a thick fur coat and can overheat very quickly. Toys and or items for climbing can be added to the area to give the chinchilla more to do while it is out. Some examples of play time toys are chew toys, a wheel, tunnels and boxes. If it is not possible to chin proof an entire room for the chinchilla, a small playpen made for animals can be used. The play area should also not allow the chinchillas to meet through the bars of the cage. Besides giving them the chance to bite each other, it can also allow males to breed the females through the bars of the cage.

Safety
In order to have a safe play time, chin proofing is a must. In addition to chin proofing, proper supervision is essential. Chinchillas should never be allowed out to play without an attentive adult present and watching them. These little animals are masters at getting into trouble and escaping. They will chew anything and everything if left unattended for a long enough period of time. Injury and illness due to falls and ingesting foreign objects are just two of the many things that can go wrong during play time. A few others include electrocution from chewing electric cords, getting trapped in a recliner, and being stepped on. While chinchillas are out playing, everyone present should use the “chinchilla shuffle,” walking without lifting the feet, when they walk. This will help prevent accidents in which the chinchilla is either stepped on or kicked.

This is a play pen for small animals. These work
great for many chinchilla owners and their pets.
Some have a lid and a bottom pan.
A special note about play time is necessary. Play time is not allowing a chinchilla to run freely about the home for any length of time. This is called “free roaming” and is a very dangerous thing to allow a chinchilla to do. There are so many dangers and so many ways a chinchilla can become hurt if running loose in a home. They have been found stuck in areas such as under a tub or vanity, in the wall, under the kitchen cabinets, behind or under the refrigerator or freezer, and in the mechanical workings of recliners. Many chinchillas have been killed when the owner closed the recliner or moved the sofa to get to them. When free roaming, chinchillas can also find a wide variety of items to chew that they should not be allowed to ingest. Items that are poisonous or can cause a blockage of the digestive tract seem to be favorites among chinchillas.

Time of Day, Duration and Frequency of Play Time
When deciding on the time to do play time, consideration should be given to the time of day or night. Chinchillas are crepuscular by nature, meaning that they are most active in the hours surrounding dusk and dawn. These are the best times to enjoy the activity. A wide awake chinchilla has more fun during play time than one that is half asleep.

Another consideration is the duration of play time. If the chinchilla is not used to it, caution is advised. Begin with five or ten minutes and increase the time by five minutes each week. Allowing the chinchilla to run around for an hour or two when it is not used to so much activity can result in seizures due to low blood sugar. Working up to an hour or more, if it is done slowly, allows time for the chinchilla’s body to adapt to the increased level of activity.

The frequency of play time is yet another consideration. Chinchillas are creatures of habit. Once they learn a routine, they will expect that routine to be repeated. Most people have play time once a day, though twice a day is acceptable, too. If a regular schedule is kept, chinchillas are often found waiting at the front of the cage to come out to play at the usual time. 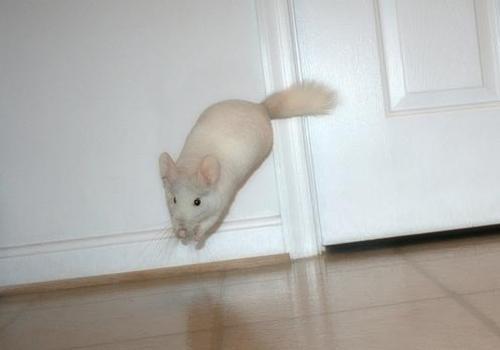 This chinchilla is “wall surfing” which is
fun for both the chinchilla and its owner.
Age of the Chinchilla
Not all chinchillas should have play time. Chinchillas under the age of six months should not be given play time. The reason for this is quite simple; baby chinchillas are not very intelligent. When having fun, the kits do not know when to stop playing and they actually can run themselves to death.

Keeping the Genders Separate
A brief note on separating the genders for play time is necessary. Males and females should not be playing with each other for any period of time. It takes but seconds for a male to breed the female. No matter how fast a person is, stopping chinchillas from breeding is not possible. It is much better to keep the genders separate with no chance of them coming into contact with each other. Also, a pregnant female should not be given out of cage play time at all. Vigorous exercise can cause her to lose her kits.

Vacations and Playtime
Vacation can been a nerve wracking time for chinchilla owners. Concerns over whether or not the chinchilla is fine frequently bother its owner. This worry can be alleviated quite simply. Do not have the person who is watching the chinchilla take it out for play time. This will remove any chance that something can happen, such as a chinchilla that does not want to go back into its cage and runs from the caretaker. It is far less stressful for the chinchilla to just remain in its cage. Missing play time while you are away will not cause behavioral problems in the chinchilla.