Why do i need to?

Quarantine, what is it? Does it really do anything? My new chinchilla looks fine. Do I really need to bother? These are some of the questions that are constantly being asked by chinchilla owners. 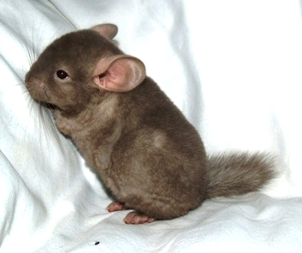 A six week old kit
Does all this work and separation actually do anything? Yes. Within and on every living creature are pathogens (germs). Groups that live together share the same pathogens and immunity to them. They can carry a pathogen and not show any visible signs of it since they are immune. Individuals from other groups can, and usually do, have different pathogens. When individuals from two different groups come in contact with each other, they exchange pathogens and individuals from both groups may become ill. After a month, the illnesses taper off as all of the individuals become accustomed to all of the pathogens that are present. This is why quarantine lasts for a minimum of thirty days.

So, the new chinchilla looks fine. Does it need to be quarantined? Yes. As mentioned before, an animal can carry a pathogen and not be affected by it. This means that the chinchilla could look fine, but carry something that would make the other animals in the home ill. The reverse is true, too. A healthy chinchilla that has lived in the home is capable of giving a pathogen to a new chinchilla making it ill. Overall, quarantine is a method that helps keep all of the chinchillas healthy. It diminishes the risks that accompany the arrival of a new member to the group and helps prevent the illness and possible loss of one or more beloved pets.