When you first bring your chinchilla home, it will probably be rather frightened and nervous. It would be best to place him in his cage and let him have some peace and quiet for a couple of days. This means that you should not try to pick up or hold him unless absolutely necessary. You should also try to keep noise levels down while he acclimates; barking dogs and noisy children can make it harder for him to settle in. During this time, you should talk to him softly whenever you need to feed him or clean his cage. You can also sit near his cage and talk softly, read a book or sing to him. This will allow him to get used to your hands and voice. 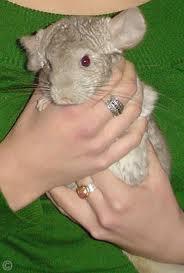 This is one way to properly
hold a chinchilla.
Once your chinchilla has had time to settle in, begin by offering him a small portion of a treat. Good treats include uncooked rolled oats (not the instant or quick cooking kinds), plain shredded wheat, plain cheerios, rosehips, or even his regular pellets fed from your hand. Be careful not to feed him too many treats since this could cause him to not eat his regular food. One to two treats a week is okay. Say his name and allow him to come to you and take the treat from your hand. Repeat this until your chinchilla is coming to you every time. This will probably take several days or weeks in order to avoid giving too many treats. Please note that kits under 6 months of age should not have treats. You can use pellets or hay to teach him to come to you.

The next step is to place the treat on the palm of you hand so that he will have to place his front paws on your hand. Continue this, moving the treat a little farther up your arm each time. You can also begin scratching him on the head and behind the ears. This will teach him that coming to you and climbing on you is nice. After a while you will no longer need the treats, just his name, soft words and scratching.

This is when you can begin picking him up. Offer a treat and when he climbs on you, lift him up. He will probably jump off when you lift. Do not worry. Keep doing this and eventually the chinchilla will allow you to pick him off without jumping off of your hand. The proper way to hold a chinchilla is to hold him close to your body and provide support for all four legs either on your hands or on your arms. This helps him fee secure. If the chinchilla is wiggly, you can also hold on to the base of the chinchilla’s tail, right next to the body. This will help keep him from jumping out of your hands. Never allow your chinchilla to jump down to the floor while you are holding him. Chinchillas are fragile animals and can easily break a leg. If he still seems nervous when you hold him, offer him a treat, pet and scratch him and talk to him in a soothing voice. It won’t be long before your chinchilla is more than happy to have you hold him. 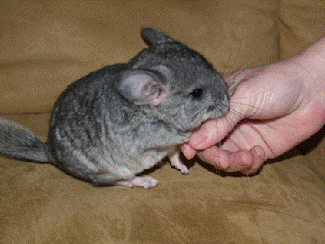 A young chinchilla exploring a hand.
Biting:
Chinchillas rarely bite, but when they are frightened they can and sometimes do. When this happens, do not back off or react to the bite. Backing of will teach the chinchilla that biting gets him what he wants. After a few times of not getting his way the chinchilla will stop biting. If your chinchilla becomes a habitual biter or bites hard enough to draw blood, wear leather gardening gloves while handling him until he stops biting.

Note:
Treats can also be used to train your chinchilla to come when called, go to his cage when playtime is over, and do tricks such as dancing, jumping through hoops and flips.